Many of your gay fans, I among them, have long admired what you told Ellen: "I hate fur, and I don't wear fur." I included a link because these recent photos of you in fox and rabbit and with a wolf carcass make it appear that you have amnesia. I'm also including this brief video hosted by Tim Gunn showing the violent cruelty that you promote when you wear fur. What happened? Are your stylists telling you that it's fake, or are you a turncoat? Many gays are animal advocates because we recognize that the same arrogance and indifference that some have toward animal suffering has at times been directed toward us personally because of our orientation. PETA has long participated in Pride events around the country, and just last week, we helped lead protests against Chick-fil-A. But by wearing those dumb furs in a heat wave, you're making yourself a target just like the mindless Kim Kardashian. As we plan our fall campaigns, please tell us whether what you gracefully told Ellen was heartfelt or just a pose.

We await your reply.

For those press and such who are writing about whether or not my fur is actually real,
please don't forget to credit the designer HERMES. Thank You! LOVE, gaga 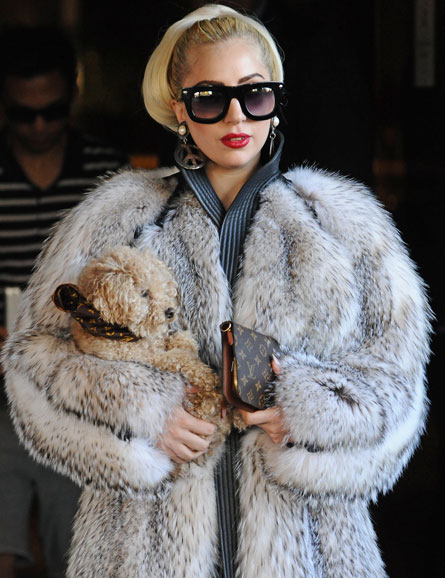